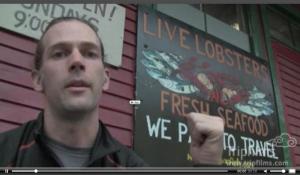 I kneel down in the middle of a floor soaked in icy water, feeling the wetness seep into the fabric of my pants. The scent of fish hangs thick in the air. People around me make an effort not to pay attention to what I’m doing. I hit “record” and pan across the scene, following a woman named Patty as she packages lobsters up in brown paper bags. I stop recording and let the euphoric “I got the shot” feeling spread through me. It’s tempered by the fact that I don’t have time to replay the footage to be sure–and, of course, Patty has moved on to her other duties. I move into my next position to catch the next quick clip.  The location is Harbor Fish Market on Custom House Wharf in Portland, Maine, and this is my latest freelance gig: hometown video correspondent for tripfilms.com. For them, I’ll be shooting 10 1-minute films about Portland. I’m very excited to be working with these guys, since, in a very practical way, they put me on the path to living one of my long-forgotten dreams: Travel Show Host.
Not long ago, you had to be very cool, charismatic, and–most important–backed by a network to be a travel show host. For a while during the mid-90’s I would rush home to find out where Lonely Planet’s “Globe Trekkers” Ian and Justine were headed to next. I wanted to be one of these guys, jet-setting to exotic locals, meeting interesting people and eating cringe-worthy local delicacies.  Eventually, my interests moved on to things that don’t require a production crew and I lost touch with my yearning to take people out into the world from their livingrooms. Last winter, the bike/ski shop I work at opened a new location at a XC ski center. Embedded in the center’s web-page was an amateur video made by a film student about the trails. This use of video on a webpage reminded me of a statement I heard several times while attending the SATW (Society of American Travel Writers) Travel Writing/Photography Institute: because high bandwidth is becoming more common, video is THE THING to get into. I typed “travel, video” into a search engine and was deposited into TripFilms.com. I saw a bunch of people traveling, and creating travel videos. Though most didn’t have the polished feel of a “Travel Channel” production, they had every bit as much heart, were every bit as deep in the culture and appeared to have just as much fun. Plus, these filmmakers were fully independent! A few more clicks of the mouse led me to an extraordinary revelation. HD camcorders capable of creating decent quality video were less than a $1000! In less than 15 years, technology has completely altered the landscape. Since scraping together the money to buy my camera and software, I have signed on as an intern for Matador TV. Looking for “the best travel content on the web” led me to an overwhelming amount of awesome filmmakers from solo travelers looking into a camera at arm’s length to full-scale productions. I also found Web Series like “In Transit” and “Brainrotting” and “The Season.” These series showed me that a person can actually produce a TV show with multiple episodes themselves. People like David Adams and Peter Bragiel are stars. Now I’m a star, too–well, not yet. But I am living my travel host dream.